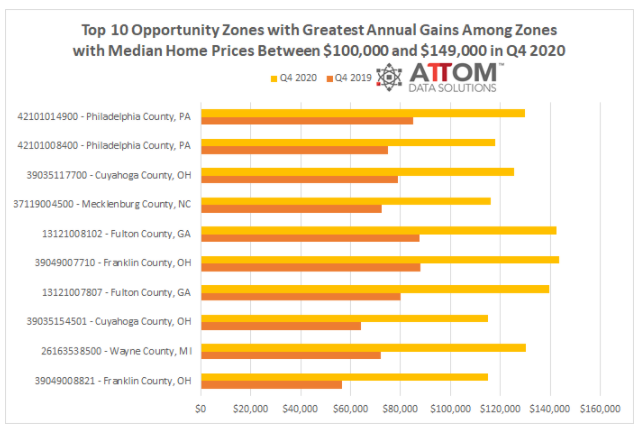 ATTOM Data Solutions’ recently released Q4 2020 Opportunity Zones Report found that among the qualified Opportunity Zones designated by the Tax Cuts and Jobs Acts of 2017, median home prices increased from Q4 2019 to Q4 2020 in 77 percent of those designated zones with sufficient data. The report also found that median prices rose by more than 10 percent in nearly two-thirds of the zones analyzed. Those percentages were roughly the same as in areas of the U.S. outside of the designed zones.

According to ATTOM’s latest opportunity zones analysis, while prices remain well below average in most Opportunity Zones, about 38 percent of the zones with enough data to analyze still had median prices of less than $150,000 in Q4 2020. The analysis noted that figure was down from 46 percent a year earlier as prices inside some of the nation’s poorest communities rolled ahead with the broader market.