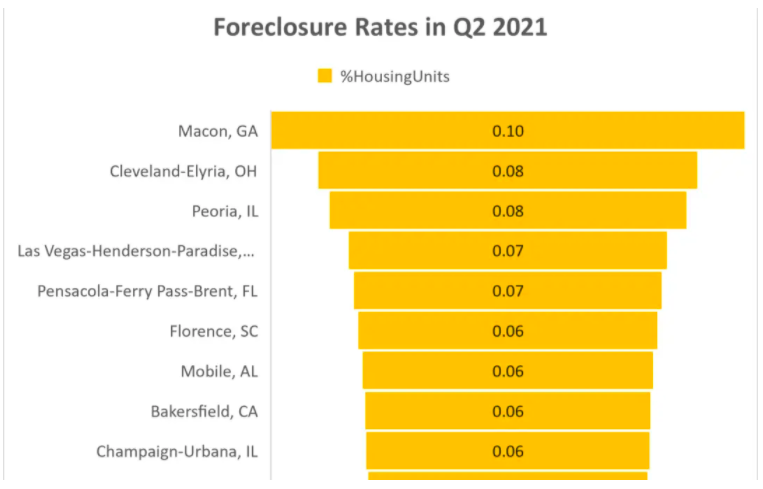 According to ATTOM’s latest foreclosure activity analysis, with just 65,082 U.S. properties with foreclosure filings in the first six months of 2021, only five of the greater populated metros saw an increase in total filings. Those metros included Tyler, Texas (up 88 percent); Brownsville, Texas (up 21 percent); Springfield, Illinois (up 19 percent); Sioux Falls, South Dakota (up 9 percent); and Lake Charles, Louisiana (up 5 percent).

The midyear foreclosure market report also cited a few of the high-level findings from ATTOM’s Q2 2021 analysis, including there were a total of 33,964 U.S. properties with foreclosure filings in the second quarter of 2021, up less than 1 percent from Q1 2021 and up 11 percent from Q2 2020.

The report stated that second quarter foreclosure activity was below pre-recession averages in 92 percent of the metro areas analyzed among those with a population of at least 200,000 and sufficient historical foreclosure data, including New York, Los Angeles, Chicago, Dallas, Houston, Miami, Atlanta, San Francisco, Riverside-San Bernardino, Phoenix and Detroit.

ATTOM’s Midyear 2021 foreclosure market report also noted that properties foreclosed in Q2 2021 took an average of 922 days from the first public foreclosure notice to complete the foreclosure process, down slightly from 930 days in Q1 2021 but up from 685 days in Q2 2020.